Description:
Upon returning from a 25-day residency in Vienna, Austria, the Luther College Symphony Orchestra will perform a homecoming concert in the Main Hall of the Center for Faith and Life on Luther's campus.

The performance is open to the public with no charge for admission.

Details:
Luther's Symphony Orchestra is comprised of 86 student musicians studying a range of academic disciplines.  The Orchestra performs under the direction of Daniel Baldwin, Luther College professor of music. The 2019 Vienna residency includes daily rehearsals and coursework, which includes visits to museums and other cultural sites in Vienna.  In the evenings, students attend operas, ballets and concerts at the city's Konzerthaus, Staatsoper and Musikverein. Luther College's Vienna residency is a unique opportunity among undergraduate Symphony Orchestra programs. It has been offered every four years since the 1970's.

Towards the end of the residency the Luther College Symphony Orchestra will give concerts at the Slovak National Theatre in Bratislava, Slovakia; at Kultur Kongress Zentrum Eisenstadt in Eisenstadt, Austria; and at the famed Musikverein Golden Hall– the home of the Vienna Philharmonic–in Vienna.

The program for each performance begins with Wagner's Prelude to "Die Meistersinger von Nürnberg." The concert continues with Mendelssohn's Concerto for Violin in E minor, Op. 64 featuring solo violinist Igor Kalnin, Luther assistant professor of music. The orchestra then performs "Three Dances," from "The Three-Cornered Hat," a ballet by Manuel de Falla, and concludes with Gershwin's "An American in Paris."

The Luther College Symphony Orchestra is Luther's largest and oldest orchestral ensemble.  In addition to regular concerts featuring masterworks of orchestral literature, Symphony Orchestra has presented six world premieres of new compositions and arrangements since 2001. The orchestra also collaborates with Luther choirs in biennial performances of major choral-orchestral works and in the annual "Christmas at Luther" festival performances.

Daniel Baldwin, Luther professor of music, has served as director of orchestral activities at Luther since 1997. As the head of Luther's music department, Baldwin conducts Luther College Symphony and Chamber Orchestras and the Opera Workshop, as well as teaches courses in conducting. He earned a bachelor's degree from Furman University and Master of Music and Doctor of Musical Arts degrees from the University of Texas at Austin. 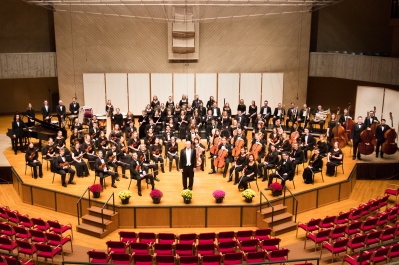