Everyone is invited to join the Oneota Valley Community Orchestra for their second concert of their fifth season featuring principal cellist Craig Hultgren on Sunday, February 24th at 2:30 pm.  Celebrating their fifth season as the Driftless Region’s foremost orchestral ensemble, the OVCO will perform works by Janacek, Mozart, and Dvorak. This free concert will take place at Decorah High School Auditorium.

The OVCO will begin with Lachian Dances, Movements V and VI.  Written by Czech composer Leos Janacek, Lachian Dances is a collection of instrumental arrangements of Czech folk dances.  Movement V, Celadensky, is a ode to the village of Celandna, from which this lively dance came. Movement VI, Pilky, has its origins in a dance that comes from farmers preparing for the onset of winter.  This three-section piece ends with a climatic finish.

The OVCO continues with Mozart’s Symphony No. 30 in D Major.  This symphony, also known as the Prague symphony, was debuted there in 1787.  One of Mozart’s three-movement symphonies, this piece also included the lavish use of wind instruments.  These two characteristics point to Mozart’s intention to expand what traditional symphonies have been in the past.  This virtuosic piece is sure to be a crowd pleaser.

The OVCO concludes with Cello Concerto in B Minor, Op. 104, by Antonin Dvorak.  This piece, written in 1894, was one of Dvorak’s last solo concertos. Considered one of his innermost works, this piece is one of profound contemplation but also one of expression and liberal proportions.  The OVCO is thrilled to feature their own Craig Hultgren on cello.

Craig Hultgren is active in new music, the newly creative arts, and the avant-garde. Recently leaving Birmingham after more than 30 years as a member of the Alabama Symphony, he now resides on a hobby farm outside of Decorah.  The New York Classical Review commented that he, "…played with impressive poise and sensitivity…" for Dorothy Hindman's 2016 chamber music retrospective at Carnegie Hall. At this point, almost 300 works have been created for him. A recipient of two Artist Fellowships from the Alabama State Council on the Arts, he was a member for many years of Thámyris, a contemporary chamber music ensemble in Atlanta. He is a founding member of Luna Nova, a new music ensemble with a large repertoire of performances available as podcast downloads on iTunes. Hultgren is featured in three solo CD recordings including The Electro-Acoustic Cello Book on Living Artist Recordings. For ten years, he produced the Hultgren Solo Cello Works Biennial, an international competition that highlighted the best new compositions for the instrument. He taught at the University of Alabama at Birmingham, the Alabama School of Fine Arts, Wartburg College, Iowa, and Birmingham-Southern College where he directed the BSC New Music Ensemble. He is a founding member and former President of the Birmingham Art Music Alliance and was on the Board of Directors of the Metropolitan Youth Orchestras of Birmingham and their Scrollworks program. Currently, he is Vice President of the Oneota Valley Community Orchestra Board of Directors, and has recently become Chair of the Board of Directors for the Iowa Composers Forum.

Founded in 2014 under the direction of Matthew Cody, the Oneota Valley Community Orchestra presents free live classical music to the residents of the Oneota Valley, promotes music education, and provides the opportunity for amateur and professional musicians to perform great masterpieces of music. The fifth season of the OVCO is sponsored by the Marion E. Jerome Foundation.

The OVCO is a 501(c)3 non-profit through the state of Iowa and the federal IRS. All donations are tax deductible.  For more information about the OVCO, visit www.ovcorchestra.org.
Event Date:
2/24/2019
Event Time:
2:30 p.m.
Location:
Decorah High School Auditorium
100 Claiborne Drive
Decorah, IA 52101

Contact Person:
Megan Lien
(phone: 641-420-4907)
Details:
This concert is free and open to the public.
Links:
Event Link
Email Reminder:
click here to setup an email reminder for this event 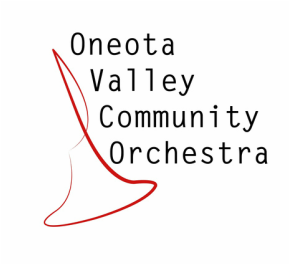