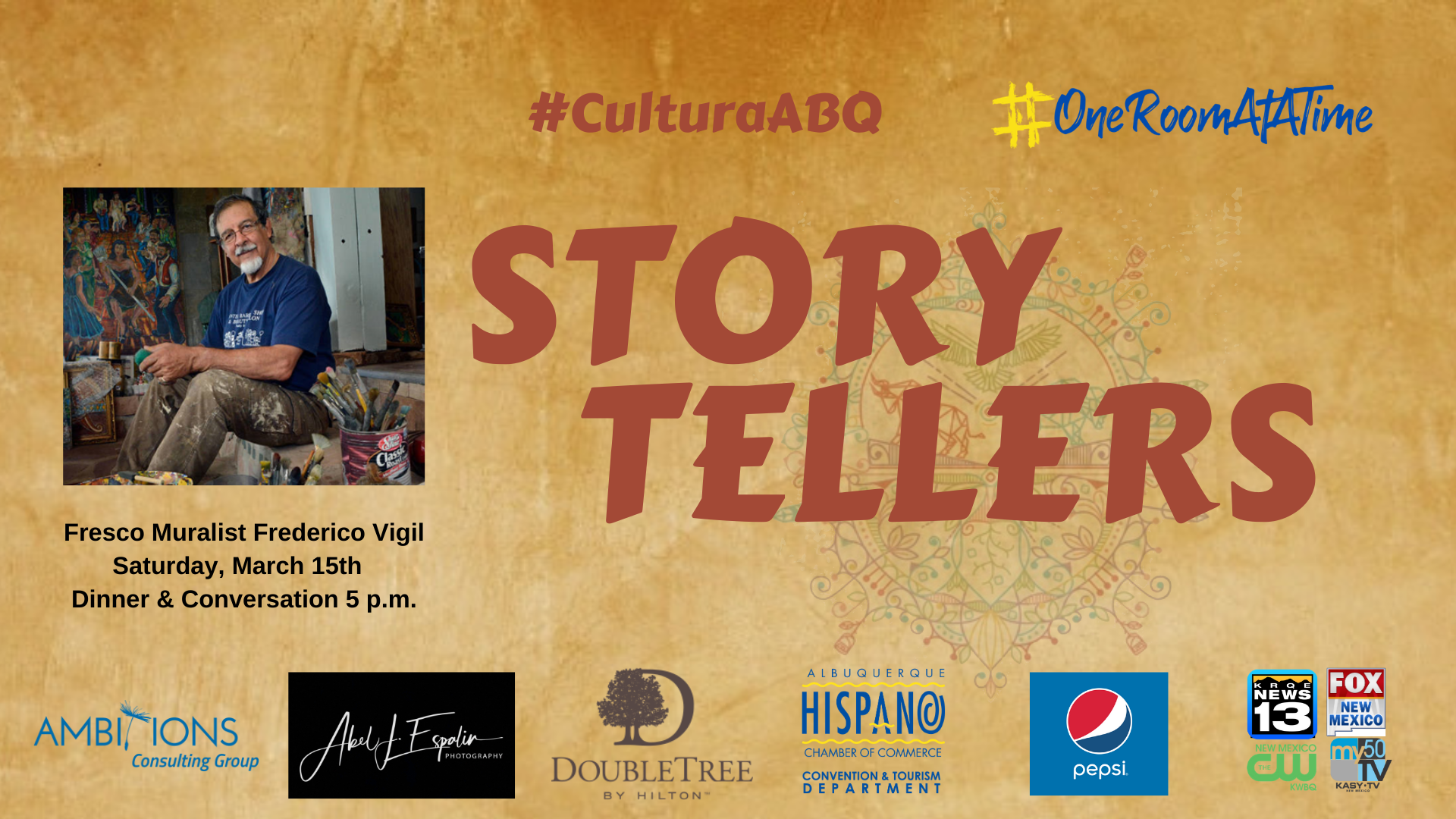 Join us for Dinner and Conversation
with Fresco Muralist Frederico Vigil

PERCHED ON A SCAFFOLD that hugs the walls of an Albuquerque Convention Center stairwell, Frederico Vigil stands on his tiptoes. Paintbrush at arm’s length, he sketches in yellow ocher the outline of a man carrying a wine barrel. He pivots to dip his paintbrush in the bucket, ducking under the scaffold. He’s 73 (“plus tax,” he adds), but his “fresco yoga” helps keep him limber, he says. “Are you afraid of heights?” he calls. “I am!”
Acrophobia aside, Vigil has spent nearly four decades clambering up and down scaffolds as one of the few masters of buon fresco (true fresco) in the Southwest—painters who work, Michelangelo-style, on just-applied wet plaster. His credits include North America’s largest concave fresco, also in Albuquerque, at the National Hispanic Cultural Center.
Since 2018 he’s been working on a 2,500-square-foot monumental fresco curving along the stairwell walls between the east and west complexes of the convention center, just outside the Kiva Auditorium. It tells the history of viticulture around the world and throughout New Mexico. It’s his latest masterwork in a storied career, and visitors can observe him at work into mid-2021, when he plans to complete the piece.
Art has long been a part of Vigil’s life, though not always in the traditional sense. He grew up on Santa Fe’s Canyon Road, before it grew into a famed stretch of fine-art galleries and working studios. Then, it was a rural, dirt road—“a wonderland,” Vigil says, recalling days of fishing in the Santa Fe River and playing in what became Patrick Smith Park. With five sons to keep in line, Vigil’s father put them to work building rock walls and helping the extended family mud their adobe houses, which would later reveal itself as Vigil’s start in fresco.
His formal apprenticeship, however, came in 1984. On a Santa Fe Arts Commission fellowship, he studied with Lucienne Bloch and Stephen Pope Dimitroff. The two had been apprentices of revered Mexican fresco artist Diego Rivera in the 1930s. Used by the ancient Romans and reaching its apex during the Italian Renaissance, fresco may seem an unusual choice for a present-day artist from Santa Fe. But Vigil found himself at home hauling and mixing bags of plaster. “I liked the building aspect of it. It’s very tactile.”

Join us for Dinner and Tour

Event Registration:
Outlook/ vCalendar/ Google:
Click on the icon next to the date(s) to add to your calendar:
5/15/2021